The burmese fairy size lamp base auctioned on Ebay for a high price--$515. I haven't seen one come up for a long time.

Yep, I was watching this cup, but it quickly exceeded my budget. So the question is, will the cup increase the final value of the complete lamp by that amount?? 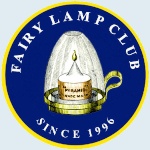 If anyone is purchasing lamps, or lamp parts, as a sure way to increase their total wealth, then I think they might have been mislead some time in the past. As with any collectable, the search, the find, and the purchase can give a rush to even the most seasoned. There have been several occasions (not known by my wife) that I payed more than I truly felt the lamp was worth simple because I wished to have it my collection. However, the $515.00 for a Burmese cup would not fit into that category. The visual difference between a Burmese dome on a clear cup vs. a Burmese cup is not that dramatic, and would most likely not be the reasoning. This price could warrant the finishing of a multiple piece lamp with one out of seven Burmese cups missing. Then the cost could be absorbed into the piece and not turn it upside down as dramatically. The last two Burmese cups that were sold, both reached over the $500.00 amount. I have purchased complete, 5 piece Burmese lamps, in the same amount of time for less than $500.00. At this rate, it would almost be beneficial to separate the lamps into their pieces and sell them off a piece at a time.

Well, I gues someday, when all the epergnes are outfitted with Burmese cups, I may be able to afford to be competitive in the bidding.

Aside fro the auction, I wishI knew more about these pressed Burmese cups. To the best of my knowledge they are the only examples of pressed Webb Burmese ware. Or, is there a possiblity that they were not actually produced by Webb? Just a thought to stir the pot.

I suppose it is possible that the burmese cups were made by the same company that manufactured the clear glass cups. Do we know who manufactured the clear cups? A while ago I purchased a Fenton burmese fairy size cup. The color is good and it looks nice for display on a burmese fairy lamp. I guess the value wouldn't be the same as for an authentic Clarke's burmese cup, but probably not $515 worth.